The great George Herriman died 71 years ago today. Remembered now as the creator of the Krazy Kat comics, Herriman is not only considered the greatest American cartoonist of the twentieth century but also, by some critics at least, the greatest American artist of the twentieth century. Whether or not you agree with that assessment, the beauty of his line and his limitless imagination must surely make him a contender. His influence was always greater than his popularity: Art Spiegelman, Richard Thompson and Robert Crumb are just some of the artists who would acknowledge him as such. The strange adventures of Krazy Kat, Ignatz, and Offisa Pupp still charm and amaze today, seeming both contemporary and timeless. But look behind the main characters in his strips and you’ll see backgrounds that repay careful study. Shifting vistas inspired by Monument Valley and the Enchanted Mesa come and go, a rocky outcrop in one frame replaced by a shack with a crooked chimney in another. I was always fascinated by his trees, however, which twist and zigzag in ways that few do in nature. I was so captivated by them that I filled this sketchbook page with a few examples. Unusually for me, I copied them line for line – after all, who could improve on Herriman?

Gourd, Pomegranate and Squash (all oil on board 2015 15cms square)

I didn’t actually mean to start painting in oils: I was told about a course run by Ed Cooper which I thought was on acrylics but was actually an introduction to oil painting, but it turned out to be serendipitous. I’d always enjoyed painting still life and admired Carol Marine’s daily paintings – small (15cms) square pictures painted loosely in a couple of hours. Adopting a new medium almost encourages a change of direction, and there are worse things to do than spending a couple of hours on a Sunday morning looking hard at a gourd or a pomegranate. At the moment – as you can see from these three pictures – I’m still struggling to understand the medium, but if one is unhappy with the results it’s no tragedy to wipe the board clean and start again. I’d like the finished pictures to be looser than these eventually, but the journey is as much fun as arriving at the destination. As the great Willem de Kooning once said, “You have to start, over and over again.”

In 2009 the Book Depository ran a bookmark competition and I’m pleased to say I was one of the winners – not with this one though. Although it referenced books and used the bookmark shape to good advantage, I wonder now why I ever thought it had a chance of winning. Imagine the reaction of some poor child, opening her copy of the Gruffalo and finding this tucked inside. You’ll be pleased to know that it wasn’t drawn from life: I followed Edward Ardizzone’s advice and drew it wholly from the imagination as an illustrator should, according to him. My winning drawing showed an old man sitting on a riverbank reading a book and fishing with a line strung from his toe. Much more tasteful.

In the Fen Country (collaged watercolour squares 2012 A4)

A few years ago I attended another of Annie Rice’s inspiring workshops, this time on watercolour landscape painting. After a few warm-up exercises, we were sent off into the Norfolk countryside to paint. There were water-filled ditches, banks covered in wildflowers, wind-twisted trees that were hundreds of years old, clumps of bulrushes, a derelict barn…but I chose a level field with a distant line of conifers. The resulting painting was the dullest thing you could imagine. When I got it home I was about to throw it in the recycling when I noticed some of the details were quite appealing, so I covered it in a grid of squares and started cutting it up. The more evocative bits were pasted onto a piece of thin brown card to make the image above, far more interesting in its semi-abstraction than the amateurish source painting. 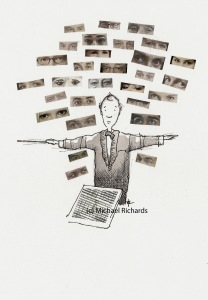 Illustrating Inside Conducting in 2012-13 was an enormous pleasure and a steep learning curve for me: you don’t, I realised, produce finished drawings to show to an author, even one as good-natured as Christopher Seaman. The outcome is that I have two or three versions of many of the drawings – some with minor variations. The drawings here were not included in the actual book and are presented as ‘out-takes’, so to speak.

The one with all the eyes was to illustrate how conductors feel nervous before a concert, but we had two drawings for that section and this was dropped; the one with the different conducting objects was thought to be too frivolous, although it is my daughter’s favourite and mine too; finally the Beethoven did appear in the book but was topped and tailed, cutting out the announcement and, tragically, LvB’s thrombosis socks, of which I was very proud. It illustrates a rather baffling quote by Tom Stoppard about how the course of western classical music would have changed had Beethoven perished in an air accident…yeah, right, Tom.

Apologies for the (c) Michael Richards legends on each image. I’ve had some slightly suspicious visits to this page and there are those who would use others’ pictures without credit and for their own gain. Yes, really!

David Hughes is an artist, illustrator, caricaturist and writer who lived near my home town of Manchester. This picture – in the spirit rather than the style of David Hughes, on reflection – was inspired by his book, Walking the Dog, which had particular resonance for me as we’d recently taken in Gerald from the Dogs’ Trust. I enjoyed our early morning walks when I’d try to engage him in conversation but, being a dog and a greyhound at that, he rarely responded.  One day, I’ll drive over to where David Hughes lives, knock on his door and ask him to teach me something.

Having spent my formative years being (over-)influenced by Edward Gorey with his ‘certain’ line and tireless cross-hatching, I’ve spent the second half of my life trying to loosen up. Rather like the Anglo-Saxon pot (below), this was another picture that was done hurriedly and freely without any concerns how it might turn out. I was recently asked to do another version of it, and I have no idea how I did it. I thought I’d drawn small squares of colour with water-soluble Caran d’Ache Neocolour crayons, mashed them around a bit with water then drawn over the result with graphite or charcoal pencil. The problem is, I’ve never been able to reproduce exactly this effect. It’s ultimately a rather ordinary still life but I’m very fond of it.

This is another drawing from Helen Gilbart’s drawing classes in Walberswick. It’s a fairly straightforward drawing of an old pair of garden shears except the cross shape – I think – makes it more interesting, as does the small piece of cloth, the only colour in this monochrome drawing, stuck in the handle on the right. I like to think that it demonstrates the charm and character of the everyday object. It was bought by a horticulturalist in London.

Poor old William Dugdale (1605-1686), he’s done nothing to deserve the gentle mockery to which I subject him. I suppose it’s his solemn, Puritan facial expression that makes me do it. ‘It’ being replacing his sensible black Puritan hat for a series of anachronistic bonnets, titfers and head-dresses. I once drew an entire Tower of Babel on one Dugdale, another time it was a model pirate ship. These, by comparison, are relatively modest. 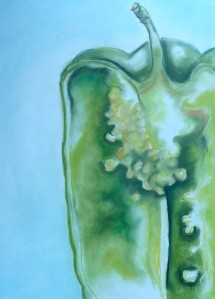 Cut open a green pepper and there’s almost more going on that you can take in: the seeds spilling everywhere, the colours of the flesh near the stem, the deep shadows of the mysterious interior, more shades of green than you have pastels in your box. Like chillies, green peppers are endlessly fascinating things to draw.