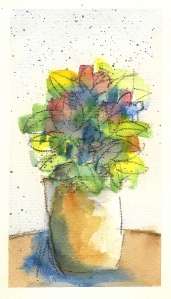 Having spent my formative years being (over-)influenced by Edward Gorey with his ‘certain’ line and tireless cross-hatching, I’ve spent the second half of my life trying to loosen up. Rather like the Anglo-Saxon pot (below), this was another picture that was done hurriedly and freely without any concerns how it might turn out. I was recently asked to do another version of it, and I have no idea how I did it. I thought I’d drawn small squares of colour with water-soluble Caran d’Ache Neocolour crayons, mashed them around a bit with water then drawn over the result with graphite or charcoal pencil. The problem is, I’ve never been able to reproduce exactly this effect. It’s ultimately a rather ordinary still life but I’m very fond of it.

This blog takes its name from John Ryder's classic book on illustration, Artists of a Certain Line'.

Antoine de Saint-Exupéry said "If you want to build a ship, don't drum up people to collect wood and don't assign them tasks and work, but rather teach them to long for the endless immensity of the sea."