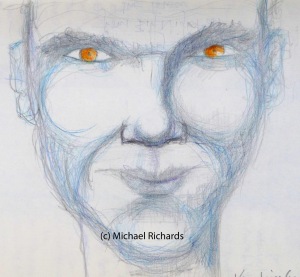 Everyone I know loves Benedict Cumberbatch.

I was fairly lukewarm about him until he photobombed U2 at the Oscar ceremony, after which he became something of a hero. I still prefer Jonny Lee Miller’s interpretation of Sherlock Holmes but you’ve got to respect a man who pricks the bubble of pomposity that always seems to surround U2, uninvited or not.

The above is an interpretation of a straightforward newspaper photograph of the actor which to me suggested something more other-worldly. I exaggerated his features and gave him worrying eyes and turned him into a vampire. No fangs though – that seemed rather hackneyed.

Bono and his pals would have been even more uncomfortable had he really looked like this.