On Sunday, the Observer newspaper printed an article on Jessie Burton, the author of the bestselling historical novel, The Miniaturist. After what she described as a ‘second-class career’ in acting she returned to her first love, writing, and produced a book that was published in 34 countries, sold over a million copies and resulted in a breakdown as she tried to deal with her own success. ‘Success can be as fracturing to your sense of self as failure: it just traumatises in a less qualified way,’ she says in the article.

The idea of success as a curse is an interesting one, especially to those of us toiling in the foothills of creativity. Wouldn’t we love to see our novel rising up the New York Times bestseller list, our paintings hanging in the Gagosian Gallery? Indeed we would, but what if that success tugged us away from all that we held dear, broke up the support systems that kept us afloat during the lean years, hammered a wedge between us and other people?

Someone who found success to be a very mixed blessing was the late Leonard Nimoy. After years as a moderately successful actor in 1960s TV shows, Nimoy was handed the role of Spock in a new space drama, Star Trek. Initially not particularly successful in the US, the series gathered momentum outside of the country (it was essential viewing when I was a boy in England) and really took off when it was syndicated.

From then on Nimoy, with his striking looks and richly beautiful voice, was Spock. Foolishly, as he admitted later, he wrote an autobiography called I Am Not Spock to try and distance himself from the character that had brought him fame and fortune. The world’s Trekkies reacted badly, threatening to ‘break him’ just as they had ‘made him’. (Personally, there are two groups I’d never pick fights with: Trekkies and fans of Star Wars.)

Some years later, Nimoy made his peace with the character and published a second autobiography, I Am Spock. By then, of course, Nimoy had also become a respected director, a photographer and a published poet, perhaps thereby loosening Spock’s grip on him somewhat.

I’ve drawn cartoon Spocks several times, mainly for my daughter’s birthday cards, but hadn’t really tried Nimoy in mufti until a few weeks ago, when I attempted the above portrait of the actor in his later years based on a photograph in William Shatner’s lacklustre memoir, Leonard.

I also met him once, very briefly. I was walking briskly through BookExpo – the publishing industry’s annual exhibition in the US – when I turned a corner and found myself standing in front of him as he waited for a publicist to take him off to sign copies of his latest book of poetry.  He seemed about nine feet tall and craggier than ever and I could think of nothing to say. I think I managed, “Good afternoon!”, received a gracious response, and then scurried off to my meeting. 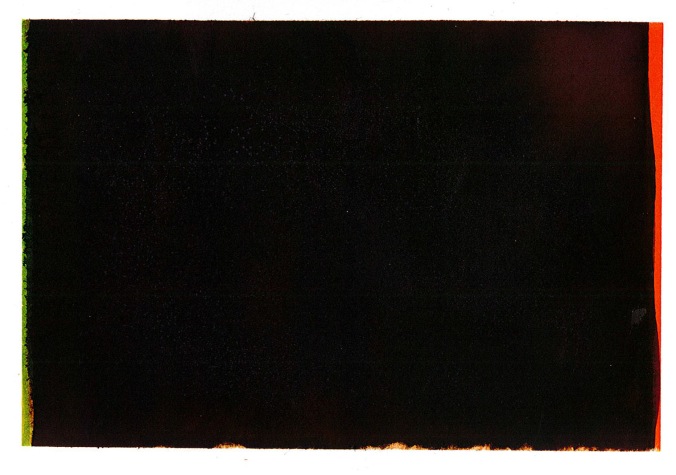 Darkness, Darkness (A6, successive layers of watercolour on handmade paper, 2012)

Cherries I (Grazalema) (A5 sketchbook page, ink and watercolour, 2016)

In painting terms, it didn’t go as smoothly as planned on our Andalusian holiday. Although I have Felix Scheinberger’s book on watercolour to hand where he warns specifically against it, I was too focussed on the ‘finished’ picture instead of what he eloquently calls enjoying the 100 small steps on the way.

Then one day the owner of the cottage where we were staying (near Grazalema) left us a plate of fresh cherries. Their various shades of red – from deepest blood to an almost yellowy orange – begged to be painted, not in any mimsy, nineteenth century Sunday afternoon sort of way, but boldly and loosely, enjoying some of the 100 small steps.

So here are two, painted in the shade of an Andalusian summer’s day, noting once again that it just needs some small inspiration – a gift of cherries – and hearing what the masters have to say.

This is not a political blog but the way this country is stumbling towards leaving the European Union and, at the same time, showing its ugliest face to the world, is disturbing.

In a nutshell, our Prime Minister, spooked by a perceived rise in support for the unpleasant, single-issue UK Independence Party before the last General Election, promised a referendum on EU membership. In the event, UKIP made little headway: not even its Homer Simpson lookalike leader, Nigel Farage, could get himself elected.

Yet the referendum is now underway and while the Remain campaign focusses on economic issues, the Brexit side is stoking up immigration fears. This is a potent argument, I’m afraid, especially in areas where you’d be hard-pressed to find anyone of foreign birth. Vote to stay in Europe, scream the Brexit headlines, and we’ll be over-run by thousands of Turks/ Bulgarians/ French farmers/ Polish plumbers [delete as appropriate].The self-proclaimed leader of the Brexit campaign, ego-maniac Tory leader-in-waiting, Boris Johnson, even compared the EU to the Nazi regime.

I fear the immigration issue might well win the day. No-one ever lost an argument by reducing a complex question to a single issue that feeds into our worst instincts. If we do leave Europe not only will prosperity and influence in the world pass us by, but our island mentality will grow more extreme. Eventually we’ll be an irrelevant voice on the sidelines, an island off the north coast of Europe festooned with union jacks, tied hand and foot by our class system and obsessed with our royal family.

The above drawing is a celebration of the diversity of Europe. I had to resort to Google Translate for some of the material so I apologise to my Danish, Polish, Hungarian and Italian readers.

There may be radio silence for the next couple of weeks as Ms Certain Line and I travel to Spain for a short break. We begin in Seville then head for the mountains of Andalucia for a week. Supposedly we have internet access but…well, we’re pretty remote by the looks of things.

I’ve already started packing as you can see. I have a pen and a reserve pen, and another pen in case the reserve pen lets me down. I also have my favourite pencil, my second favourite pencil, and my third favourite pencil in case…well, you get the idea. I’ve packed Felix Scheinberger’s wonderful book, Urban Watercolour Sketching, although I’m taking the original edition – each one decorated by Scheinberger himself – so I can improve my German and loosen up my painting simultaneously.

I hope to be able to post lots of paintings of Andalucian white hill towns on my return. Fingers crossed: the last time I was in Spain I painted one flower and an odd orange-coloured fruit…

The splendid Jacob, ‘onlie begetter’ of the fascinating and witty Jaywalks blog, has kindly nominated me for a Liebster award. I’m enormously flattered: being given an award by other bloggers who take the time to read and appreciate what you do is praise indeed. Nominating ten others in my turn is difficult: I follow a lot of terrific blogs, many of whom have already received nominations or don’t take part in such things. I’ll therefore nominate ten that I find particularly inspiring (it could have been twenty, or thirty, or…):

Instead of answering ten questions – are you really interested in my ten favourite cheeses or my most-loved fictional horse? – let me share an inspirational evening with you.

Around 1980 I was taken to a Meredith Monk concert in an intimate performance space in New York City. It was a remarkable, baffling, challenging evening – like nothing I’d ever seen before. In the interval I cranked up my English accent and – pretending to be a journalist from the London Review of Books (I actually sold ad space there) – interviewed members of the audience about their reactions to the pieces: they were generous and open  in their responses.

Although I haven’t kept up with Ms Monk’s work since, that evening was revelatory: she demonstrated that music needn’t be popular, jazz or classical; that singing needn’t be verbal; that dance needn’t be balletic. Most of all, she drew back the curtain on discovery and curiosity – my cultural world doubled in size, my horizons broadened and deepened.

So thank you Jacob, thank you Meredith Monk and thank you for reading.