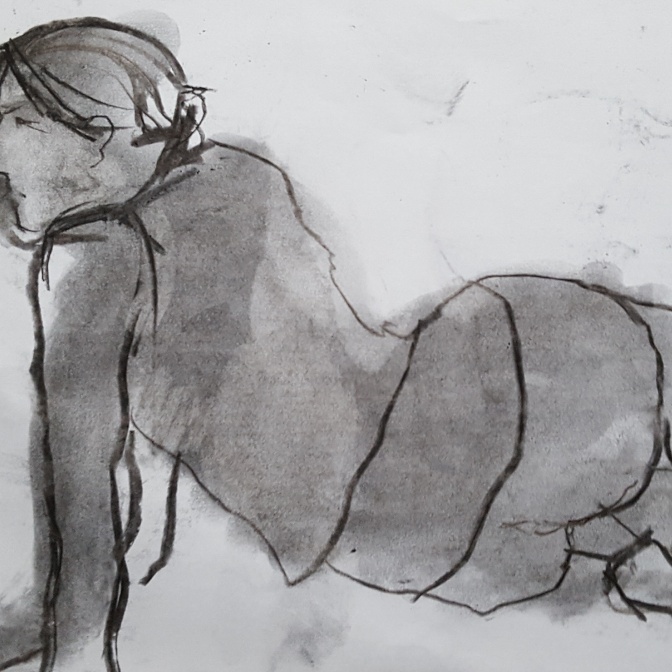 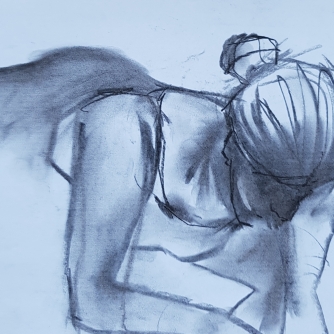 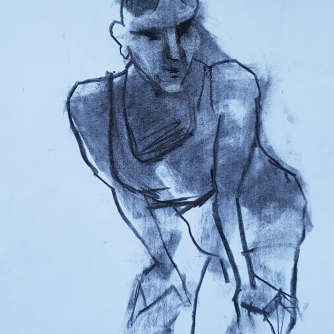 In his book The Undressed Art: Why We Draw, Peter Steinhart quotes a model called Molly Barrons: “I think it’s beautiful to see all these views of me. But I don’t think it’s me. It’s their perspective of me. It’s a very creative thing. And it’s collaborative.” Another model, Joan Carson adds, “What I’m hoping to do is get somebody connected with themselves through me.”

I’ve written before about the relationship between artist and model. It remains both fascinating and elusive: intense yet distant, tender but objective. Does it really matter? I think it does. It requires effort on both sides: whenever I draw Blue King in my Wednesday evening life class I’m aware not only of her physical exertion – an hour or more in a single position – but the fact that she is engaged in a partnership with our group. Molly puts her finger on it: it’s our perspective on the model, a collaborative exchange of pose and interpretation. Our teacher, Annabel Mednick, has often said that we’re not there to draw a portrait of the model, but to capture that light and shade, those planes, the solidity or otherwise of the human body in that position – all of which would seem to support Molly’s view of the process.

In recent weeks I’ve tried to almost sculpt the drawing out of roughly rendered swathes of charcoal, laid down to get the broad shape of the pose. Then it’s a matter of rubbing, drawing, smearing, even scratching to tease the figure out of that background. It’s a truly exhilarating way to draw.

Equally thrilling are the two or three minute poses we start with (some of them reproduced above). Spontaneity is everything: just draw, don’t think too much beyond capturing that arc of the body or turn of the head. Perhaps with this sort of work we – those of us drawing – are somehow connecting with ourselves through the model?