Darkness, darkness, be my pillow
Take my head and let me sleep
In the coolness of your shadow
In the silence of your deep

Darkness, darkness, be my blanket
Cover me with the endless night
Take away, take away the pain of knowing
Fill the emptiness of right now

A song written by Jesse Colin Young for the Youngbloods and recorded by numerous others. The illustration was inspired by Chris Ware’s comic strip diaries,  as seen in Danny Gregory’s intriguing book An Illustrated Life.

There seems to be a great deal of darkness in the world at the moment. We mustn’t let it defeat us.

Nearly half a century ago, musical satirist Peter Schickele created the figure of P.D.Q. Bach and thereby launched a career performing the works of this ‘lost’ member of the Bach family.

I wouldn’t describe W.T.F. Bach as ‘lost’ – he never left Leipzig so he could hardly be lost – so much as ignored. His early form of 12-bar Delta blues simply wasn’t welcome in Prince Leopold’s eighteenth century court. It wasn’t really until the 1960s that his music began to be played, often falsely attributed to figures such as Mississippi Fred Macdowell or Elmore James or arranged by young rock bands without any attribution at all.

That, I’m afraid, is the downside of being ahead of your time.

This post demonstrates how much I miss Richard Thompson, cartoonist and illustrator, who died earlier this year. I never knew him, but the world was a better place for his presence. 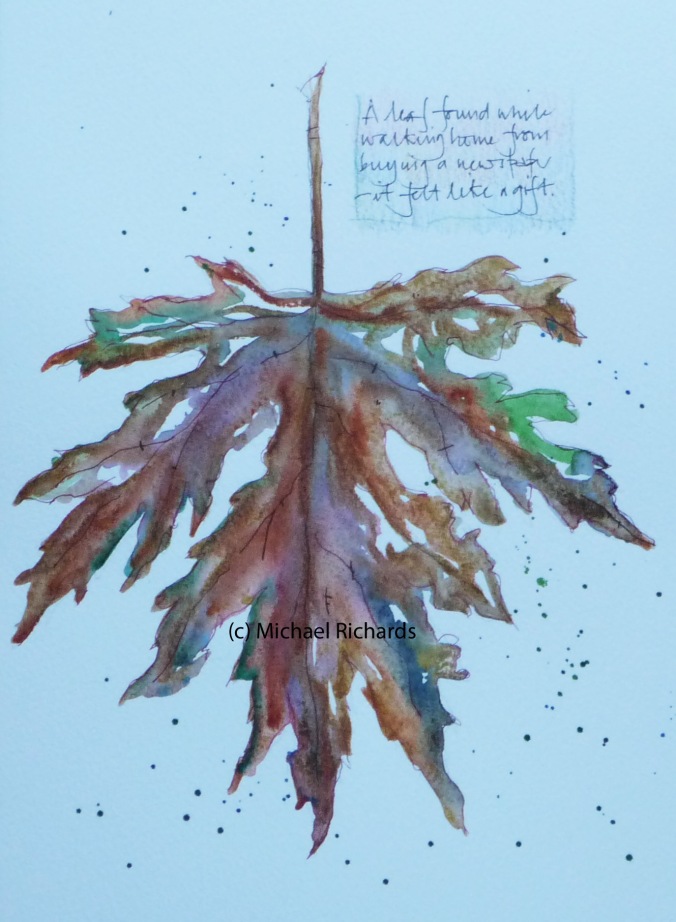 Every year in October I travel to Frankfurt for the book fair. It’s an inspiring time to be in Germany. The days are often warm, as if the summer can’t bear to let go, but the trees are already starting to turn red, gold and brown.

How often have I picked up a particularly beautiful leaf and put it somewhere – intending to draw or paint it later – then forgetten about it, finding a brown and shrivelled thing weeks later. This time of year is transience made visible, when everything changes from day to day, nature drawing down the shutters for winter.

The book fair is an international expression of creativity. The world’s publishers set out their stalls in five or six halls, some with three floors per hall. Those of us who are mainly English-speaking can only feel humbled walking through, say, the Norwegian or Dutch sections, seeing books by writers largely unknown outside of their own languages. There is so much that we can never know.

On the theme of creativity, this morning I read an interview with the conductor, Simon Rattle, in the Sueddeutscher Zeitung magazine. He described how, when conducting, the music is felt in every part of the body. He mentioned a conversation between Leonard Bernstein and Andre Previn. “How are you, Andre?” asked Bernstein. “OK,” Previn replied, “But I have terrible backache.” “Really?” Bernstein gasped, “I had no idea you were so successful!”

Recently I read Carly Simon’s memoir, Boys in the Trees. Ms Simon is, as her song lyrics would suggest, a sensitive and evocative writer, especially when remembering her childhood. In chapter two, we learn about Carly’s imaginative exploits with her cousin, Jeanie:

I sprawled alongside Jeanie on the grassy circle beneath the apple trees, engaging in make-believe conversations among the imaginary friends we had invented, including Mr Hicks, Meany and Bypress Fongton. The latter two made their home atop the pool-house weather vane, whereas Mr Hicks, lacking a permanent home, roamed between the orchard and the deep end of the pool, stirring up conflicts and making trouble for another of Jeanie’s imaginary friends, Ha Ha Ginsberg, a character who over time got to be so famous, for unknown reasons, that her name showed up in a New Yorker story. When her father gave her the news, I remember, Jeanie called upstairs, “Ha Ha, guess what, you were in The New Yorker!”

I’ve taken enormous liberties with Carly Simon’s childhood friends. I don’t know if Mr Hicks was really a duck in a bowler hat or Bypress Fongton a sharply-dressed toad in the style of the great German illustrator, Wolf Erlbruch. Careful readers among you will have noticed that I’ve changed the sex of Ha Ha Ginsberg altogether, but I couldn’t resist doing a caricature of the bearded beat poet. All I can say with absolute certainty is that Meany must have been a disgruntled cat…

Anyway, whether accurate or, as I suspect, not, drawing Carly Simon’s imaginary friends was enormous fun and my partner and I had a great time putting names to faces, so to speak. Do read Boys in the Trees – it’s well worth your time.

Recently, reading Don Paterson’s endlessly inventive 40 Sonnets, I came across his poem, ‘The Six (for John Abercrombie at 70)’, which starts like this:

You still sound like that man in early middle age

who was looking at his birthday through a fifth of Jack

when all his friends pitched in to buy him a guitar.

Two months it sat in silence. Then one day he found

that he could play whatever came into his head.

And such was his surprise each time he picked it up,

he couldn’t hear himself above the sounds he made…

It reminded me of this drawing, completed three years ago as a birthday gift for one of my dearest friends, someone who can also ‘play whatever came into his head’. The folk singer in the drawing refers to my friend’s early career in the smoke-filled folk clubs of the 1970s, and owes something to the famous photograph of John Sebastian at Woodstock (now used on his Life and Times compilation). As we’re both of that generation, and life has led us both down different paths from our hoped-for careers as Famous Artists, it seemed appropriate.

PS I cannot recommend 40 Sonnets highly enough. ‘Mercies’ is the most moving poem about a dog that you’ll ever read.